Have you ever heard of GridGain or Apache Ignite? Would you like to know its main features? Then come with us as we introduce you to this platform.

¿What is Apache Ignite?

Apache Ignite® is a in-memory data storage and processing platform, which you can use as a distributed database, messaging system, streaming and a long etcetera, to create scalable applications with high fault tolerance.

Apache Ignite was open-sourced by GridGain Systems in late 2014 under Apache License 2.0.

The GridGain® in-memory computing platform is built on top of the core features of Apache Ignite®. GridGain, which follows the open core model, adds highly valuable capabilities to Ignite in the GridGain Enterprise and Ultimate Editions for enhanced management, monitoring and security in mission-critical production environments. 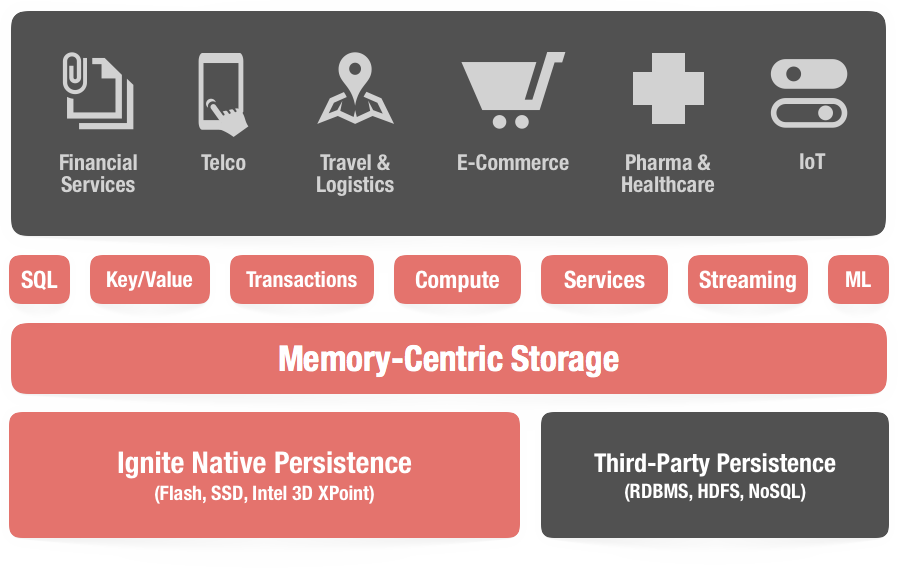 Ignite’s cornerstone is the in-memory distributed key-value store, from which other structures and services have been created that make up the Apache Ignite platform.

Ignite data grid is an in-memory distributed key-value store that can be viewed as a distributed partitioned hash map with every cluster node owning a portion of the overall data. This way the more cluster (server) nodes we add, the more data we can cache.

These are some of its most relevant features:

Ignite is designed to be completely modular and decoupled, allowing you to load the modules you need à la carte, thus optimizing the resources needed to run your applications.

It offers a wide range of services, including:

The main advantage of Ignite over other solutions is that it directly uses the system’s RAM to store and process data, making it one of the most efficient platforms available today.

Some facts about RAM and SSD/NVMe disks:

Considering this data, we can get an idea of the incredible performance obtained by directly using the RAM to store and process data.

Another advantage of using the system’s RAM directly is that it is not affected by the JVM’s GC (garbage collector) breaks.

But if we store the data in RAM, what happens if the system crashes?

Ignite implements Durable Memory which completely guarantees the consistency and persistence of data in case of a partial/complete failure of the cluster and, of course, that the cluster is fully operational, without the need of data preloading after a restart.

Ignite, allows you to send light calculations only to the nodes that contain the data, that is to say, place calculations with data. As a result, Ignite scales better and minimizes data movement, unlike most traditional databases, which operate on a client-server basis, meaning that data must be brought to the client side for processing, requiring a great deal of data movement from servers to clients and are generally not scalable.

Take a look to the post about the benefits of collocated computation.

The data stored in Ignite complies with ACID (Atomicity, Cconsistency, Isolation and Durability) both in memory and on disk, meaning that Ignite is a very consistent system.

Ignite transactions run through the network and can be distributed among multiple servers.

How do I start working with Apache Ignite or GridGain?

Let’s see how simple it is to incorporate Apache Ignite or GridGain into a Java application with maven. You can find more examples at Apache Ignite examples.

Ignite provides implementations for other programming languages like java, C++, C#, Pyphon, node.js, so integrating it into your applications will not be expensive.

It allows applications designed in the different supported languages to communicate with each other using the same technology: Ignite.

The configuration is quite simple. You’ll need to:

Note that this is a minimal configuration with local discovery through TCP.

The configuration can also be created programmatically, although personally, I recommend the use of the spring file since it allows us to use different configurations depending on the execution environment, for example, to change the discovery mechanism (discoverySpi), without having to modify the binaries of our application.

Ignite is a powerful tool that can be extremely useful if you need to create escalable applications with high fault tolerance.

It offers a broad range of services, which will allow you to, among other things:

Ignite could certainly be considered as the “all-in-one “ of distributed computing.

Can I have different Ignite instances running on the same JVM?

Yes. In fact, this feature is very interesting if we decide to implement an architecture formed by different Ignite clusters to split workloads, along with applications/services that need to access several clusters at once.

In this sense, Ignite does not impose any restrictions, you can even have multiple instances in server mode grouped in different clusters running on the same JVM (Java Vvirtual Machine).

Other FAQs answered by the Apache Ignite team.